Walter Stacy Keach Jr. (born June 2, 1941) is an American actor of stage, film, and television. Highly prolific, he has played mainly dramatic roles throughout his career, often in law enforcement or as a private detective. His most prominent role was as Mickey Spillane's fictional detective Mike Hammer, which he played in numerous stand-alone television films and at least three different television series throughout the 1980s and 1990s. The role earned him a Golden Globe Award nomination in 1984. He is portrayed as Joe Burns in the CBS sitcom Man with a Plan.

Keach was born in Savannah, Georgia, the son of Mary Cain (née Peckham), an actress, and Stacy Keach, Sr. (Walter Stacy Keach), a theatre director, drama teacher, and actor. His brother James Keach is an actor and television director. Keach graduated from Van Nuys High School in June 1959, where he was class president, then earned two BA degrees at the University of California, Berkeley (1963), one in English, the other in Dramatic Art. He earned a Master of Fine Arts at the Yale School of Drama and was a Fulbright Scholar at the London Academy of Music and Dramatic Art. While studying in London, Keach met his acting hero Laurence Olivier.

Keach played the title role in MacBird!, an Off-Broadway anti-war satire by Barbara Garson staged at the Village Gate in 1966. In 1967, he was cast, again Off Broadway, in George Tabori's The Niggerlovers with Morgan Freeman in his acting debut. To this day, Freeman credits Keach with teaching him the most about acting. In 1967, Keach also starred in We Bombed in New Haven, a play by Joseph Heller which premiered in New Haven at the Yale Repertory Theatre and later went on to Broadway. Keach first appeared on Broadway in 1969 as Buffalo Bill in Indians by Arthur Kopit. Early in his career, he was credited as Stacy Keach, Jr. to distinguish himself from his father. He played the lead actor in The Nude Paper Sermon an avant-garde musical theatre piece for media presentation, commissioned by Nonesuch Records by composer Eric Salzman.

He has won numerous awards, including Obie Awards, Drama Desk Awards and Vernon Rice Awards. In the early 1980s, he starred in the title role of the national touring company of the musical Barnum composed by Cy Coleman. In 1991 and 1996 he won Helen Hayes Awards for Outstanding Actor for his work in Richard III and Macbeth with Shakespeare Theatre Company. In 1998, he was one of the three principals in a London production of Art with George Wendt. In 2006, he performed the lead role in Shakespeare's King Lear at the Goodman Theatre in Chicago. In 2008, he played Merlin in Lerner and Loewe's Camelot, done with the New York Philharmonic. In the summer of 2009, Shakespeare Theatre Company remounted the production of King Lear at Sidney Harman Hall in Washington, D.C., which won him another Helen Hayes Award for Outstanding Actor.

He has played the title role in two separate productions of Hamlet.

Keach is a founding member of L.A. Theatre Works and had held leads in many productions with them, including 'Willy Loman' in Death of a Salesman and 'John Proctor' in The Crucible.

He was scheduled to return to Broadway in December 2014 in the revival of Love Letters at the Brooks Atkinson Theatre alongside Diana Rigg, but the play closed before Keach and Rigg were to begin their runs.

Keach was scheduled to play Ernest Hemingway in Jim McGrath's one-man play Pamplona at the Goodman Theatre in Chicago from May 30 to June 25, 2017. Keach did appear in previews of Pamplona May 19 through May 28, and was well received by audiences. He was reported to be sick on opening night, but still went on for the night's performance, which was halted about an hour into the performance due to Keach's health. The following two nights' performances were also canceled, and on June 2, the Goodman Theatre announced that the entire run would be canceled because Keach's doctors advised a period of rest and recuperation for him.

Keach played a rookie policeman in The New Centurions (1972), opposite George C. Scott. That year he also starred in Fat City, a boxing film directed by John Huston. He was the first choice for the role of Damien Karras in the 1973 movie The Exorcist, but he did not accept the role. He went on to play Kane in the 1980 movie The Ninth Configuration, written and directed by Blatty; this role was itself intended for Nicol Williamson.

Stacy Keach's storytelling talent as narrator was given worldwide exposure in the 1973 Formula One racing documentary Champions Forever, The Quick and the Dead by Claude du Boc.

Keach played Cheech and Chong's Police Department nemesis Sgt. Stedenko in Up In Smoke and Nice Dreams. He also appeared as Barabbas in Jesus of Nazareth. In 1978 he played a role of explorer and scientist in The Mountain of the Cannibal God, co-starring former Bond girl Ursula Andress. The film became a cult favorite as a "Video nasty".

One of his most convincing screen performances was as Frank James (elder brother of Jesse) in The Long Riders (1980). His brother James played Jesse James. In 1982 Keach starred in Butterfly with Pia Zadora.

Keach also starred in the TV film Ring of Death playing a sadistic prison warden who runs an underground fight club where prisoners compete for their lives.

He had also starred in the movie Planes as Skipper Riley, main character Dusty Crophopper's flight instructor. He reprised the role in Planes: Fire & Rescue.

In 2012 Keach had a significant supporting role in The Bourne Legacy, and in the 2013 Alexander Payne film Nebraska.

In 2017 the film Gotti will be released. Keach plays the part of Neil Dellacroce, the notorious underboss of the Gambino crime family.

Keach as Mike Hammer and Tanya Roberts as Velda in Murder Me, Murder You in 1983 One of Keach's early television roles was in 1958 on the syndicated romantic comedy, How to Marry a Millionaire, with Barbara Eden and Merry Anders. His first-ever experience as a series regular on a television program was playing the lead role of Lieutenant Ben Logan in Caribe in 1975. He played Barabbas in the 1977 Jesus of Nazareth (miniseries), and portrayed Jonas Steele, a psychic and Scout of the United States Army in the 1982 CBS miniseries, The Blue and the Gray. He later portrayed and is best known as Mike Hammer in the CBS television series Mickey Spillane's Mike Hammer and The New Mike Hammer from 1984 to 1987. He returned to the role of Hammer in Mike Hammer, Private Eye, a new syndicated series that aired from 1997 to 1998. In 1988, he starred as Ernest Hemingway in the made-for-TV movie Hemingway.

In 2000, he played Ken Titus, the father of the title character in Fox's sitcom Titus. Cast members of Titus have commented they enjoyed working with Keach because he would find a way to make even the driest line funny.

Keach lent his voice to The Simpsons episodes "Hungry, Hungry Homer," "Old Yeller-Belly," "Marge and Homer Turn a Couple Play," and "Waiting for Duffman," portraying Duff Brewery President Howard K. Duff VIII, and the Batman Beyond episode "Lost Soul" as an artificial intelligence. He also guest starred in a 2005 episode of the sitcom Will & Grace, and had a recurring role as Warden Henry Pope in the Fox drama Prison Break.

Stacy Keach narrated several episodes of Nova, National Geographic, and various other informational series. From 1989-92, he was host of the syndicated informational reenactment show, Missing Reward, which had a similar format to the popular Unsolved Mysteries at the time. From 1992-95, he became the voice-over narrator for the paranormal series Haunted Lives: True Ghost Stories.

Beginning in 1999, he served as the narrator for the home video clip show World's Most Amazing Videos, which is now seen on Spike TV. He currently hosts The Twilight Zone radio series. Keach can also be heard narrating the CNBC series American Greed. For the PBS series American Experience, he narrated The Kennedys, among others.

In 2008, Keach once again reprised his famous role as Mike Hammer in a series of full-cast radio dramatisations for Blackstone Audio. (He also arranged and performed the music for the audio dramas. His wife, Malgosia Tomassi also starred in the dramas playing Maya Ricci, a yoga instructor.) Keach has also read many of Mickey Spillane's original Mike Hammer novels as Audiobooks.

Keach played the role of John in The Truth & Life Dramatized Audio Bible, a 22-hour audio version of the RSV-CE translation of the New Testament. He also voiced both Job and Paul the Apostle in The Word of Promise, a 2007 dramatic audio presentation based on the New King James Version.

Keach was born with a cleft lip and a partial cleft of the hard palate, and he underwent numerous operations as a child. Throughout his adult life he has often worn a mustache to hide the scars. He is now the honorary chairman of the Cleft Palate Foundation, and advocates for insurance coverage for such surgeries. In the 1971 film Doc Keach impersonated the title character, John "Doc" Holliday.

In 1984, London police arrested Keach at Heathrow Airport for possession of cocaine. Keach plead guilty, and served six months at Reading Prison. This was during the run of Mickey Spillane's Mike Hammer, which Keach had also narrated in character; impressionist Rich Little had to fill in as the show's narrator during Keach's imprisonment.

Keach stated that his time in prison (which he said was the lowest point of his life) and the friendship he formed with a priest who befriended him during that time led to his conversion to Roman Catholicism. Subsequently, he and his wife were able to meet with Pope John Paul II to have their son blessed since his wife, Malgosia Tomassi, had gone to the same school that the Pope had attended in Warsaw.

He suffered a mild stroke in March 2009, from which he has made a full recovery. In June 2017, Keach fell ill during the opening night production of Pamplona at the Goodman Theatre in Chicago. During the one man show, he appeared lost and repeated the same lines of dialogue over and over. The Goodman cancelled the rest of the run a few days later. 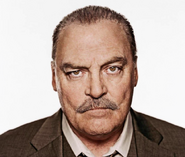 Retrieved from "https://manwithaplan.fandom.com/wiki/Stacy_Keach?oldid=3202"
Community content is available under CC-BY-SA unless otherwise noted.