Adam Burns (born in 1968), is a fictional character on the CBS sitcom Man with a Plan. He was played by Matt LeBlanc.

Before the Show[edit | edit source]

Adam comes from an Italian-American family of his brother Don, of which he is the only one. He is from, and presumably born in New Jersey.

In first episode Adam starts spending more time with his kids when Andi goes back to work.

In Two Tickets to Paradise, Adam two tickets to a Pittsburgh Steelers game, he offers to take his brother and business partner Don as a thank-you for Don covering him at work while he tends to the kids. Andi later sees the tickets and assumes Adam is taking her to celebrate the anniversary of their first date, which was also at a Steelers game, causing Adam to have to decide whom to disappoint.

Adam was accused to Mrs. Rodriguez of slacking in his role as Room Parent because he doesn't have time to make puppets for Teacher Appreciation Day, Adam threatens to transfer Emme into the other kindergarten class. This doesn't sit well with Andi, who considers Mrs. Rodriguez a superior teacher and says she had to do a lot of "butt kissing" to get Emme into her class.

Adam and his brother Don want to turn the garage into a "man cave", but there's a problem – boxes and boxes of junk that Andi refuses to get rid of because they represent family memories.

In April Fools, He and Andi went back inside the house were they check the box and the kids said "April Fools", then Andi was scared out of her. Joe didn't have the money for the fake dog poop.

Adam is generally good-natured and well-meaning, but not-so-bright. He loves food, family, friends, jam, and gardening.

Adam is a stereotypical man who worked with his brother at the Burns Brother Construction businessman, under-educated, and constantly looking for work. 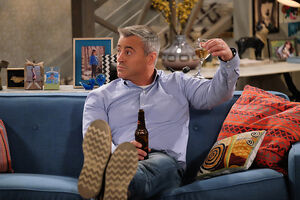 Adam sitting on the couch. 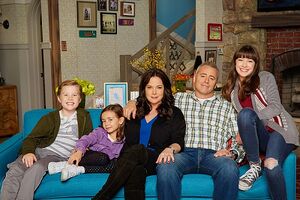 Add a photo to this gallery
Retrieved from "https://manwithaplan.fandom.com/wiki/Adam_Burns?oldid=3990"
Community content is available under CC-BY-SA unless otherwise noted.